Despite stiff competition from some of the region’s strongest swimmers, Colchester SC put in a spirited display to record 12 top three finishes and finish in fourth place on the night with 195 points.

Michelle Young, Head Coach at Colchester Swimming Club, commented: “It was a thoroughly solid team performance. A number of the team were competing alongside older, more experienced, swimmers and they really held their own. There were no DQs and the entire squad can take great pride in the effort that they put in.”

There were a number of impressive swims by the Club’s younger swimmers who recorded PBs of two seconds or more. In the 50m Breaststroke Massimo Girolami took maximum points to finish ahead of the completion in 40.55 and Angelica Mason swam beautifully to touch home in 42.73. Sandijs Cecins clocked 1:08.05 in the 100m Freestyle as he continues to impress and Sadie Rowe finished strongly to record 1:24.00 in the 100m Breaststroke. Macey Watkins, who was competing in her first gala for Colchester, also gained valuable points in the 100m Butterfly to finish in 1:20.89.

Of the older swimmers Ciara Wookey impressively  swam the 100m Butterfly twice (as a 15/u and in the open category), registering a PB of 1:05.67 and taking third spot in the open category. Masters’ swimmer Daryl Rands also recorded a small PB in his first competitive gala for the club in the 100m Breaststroke registering a time of 1:11.77 as well as picking up points in the 100m Freestyle. However, celebration of the night went to Kai Cheng in the 100m Freestyle who couldn’t contain his joy when seeing he’d registered a PB of 57.06.

Throughout the night the amazing team spirit really shone through and this was particularly evident in the relays. The boys 9/11 relay team of Jack McCarthy, Harrison Brook, Elliot Whitehouse and Massimo Girolami were particularly impressive as they took second place in both the4 x 50m Freestyle Relay in 2:11.27 and the 4 x 50m Medley Relay in 1:54.49. The 4 x 50m Medley Relay proved to be a fruitful race as the Boys 15/u team of Naythan Aung, Alfie Francis, Kai Cheng and Syd Roberts finished strongly to take second spot and help cement an impressive night for Colchester.

Michelle concluded: “The atmosphere tonight was electric at times and the noise was intense. It was great to see our supporters in the crowd, with their flags and red t-shirts, cheering us on and the swimmers poolside really getting behind their teammates. Bring on the next round on 9 November!” 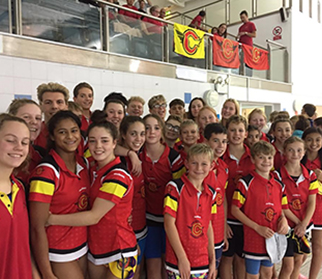 🏆 @MountKellySwim retained their @Natswimleague Cup Final title with a convincing 'special' victory at the Cardiff International Pool! 🏊 Read about their victory here ⏩ https://t.co/wl1kEcr0Qa

And @BasPhoenixSC were crowned B Final title winners 👏➡️ https://t.co/0wuurbU2fJ